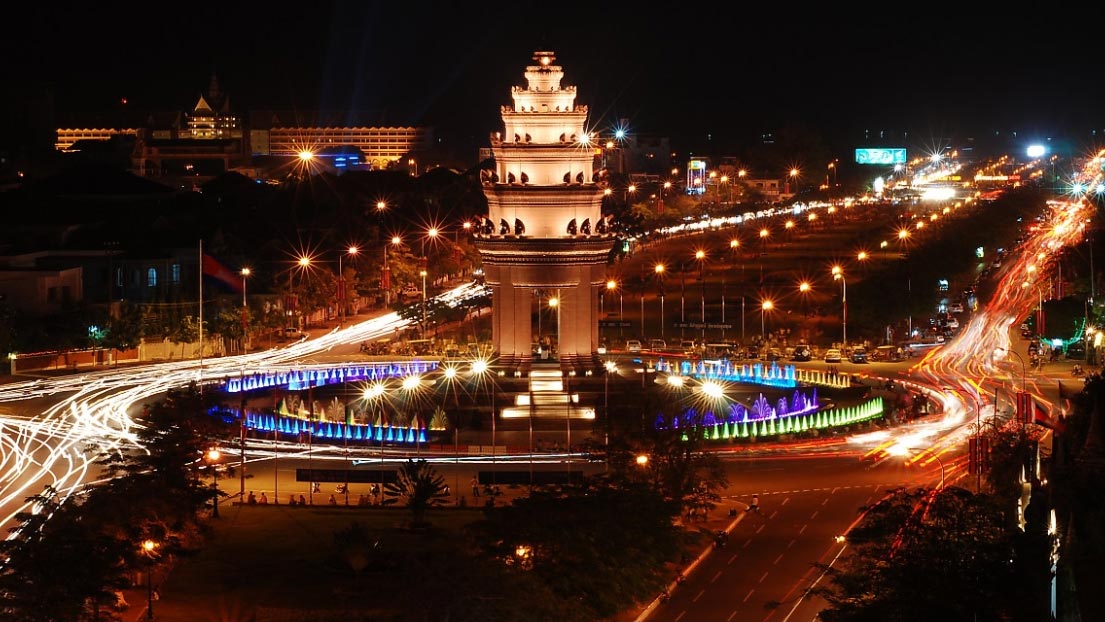 The Independence Monument ( Khmer Vimean Ekreach) is in Phnom Penh, capital of Cambodia, was built in 1958 to memorialize Cambodia’s independence from French in 1953. It stands on the intersection of Norodom Boulevard and Sihanouk Boulevard in the center of the city. It id in the form of a lotus-shaped stupa, of the style seen at the Khmer Temple at Banteay Srei and other khmer historical sites. The independence Monument was designed by the Cambodian architect Vann Molyvann

Independence Monument is a notable sight in Phnm Penh, Which tourists can sit here, enjoy the solitude and take photographs. It’s a wonderful place to enjoy the quietude and the summer refreshing breezes from the Tonle Sap.

The dark-yellow Art Deco Phsa Thmei (New Market) is also referred to as the Central Market, a reference to its location and size. It was constructed in 1935-37. The Art deco building is shaped in the form of a cross with a nice central dome has become a major landmark for the city.

Around the main buildings are stalls offer a wide variety of goods from gold and silver jewelry to antiques, Krama (checked scarves), stationery, household items, cloth for sarongs, flowers and second hand clothes, usually from Europe and the US. There are a host of good value food stalls on the structure’s western side, which faces Monivong Blvd. Central Market is undoubtedly the best of Phnom Penh’s markets for browsing. It is the cleanest and has the widest range of products for sale. Opening hours are from early morning until early evening.

The jewelries are found in the interior of the market and some of the gold ornament that you will find here are really unsurpassable in design and style. Central Market (Phsar Thmei) at Phnom Penh should have been actually called the New Market for that is what “Phsar Thmei” means in English. However, today it is popular to the tourists by its present English name. Coming to Central Market (Phsar Thmei) in Phnom Penh and then going back to your respective hotel is easy as there are plenty of transportation facilities near the marketplace. A taxi stand can be found at the northwest corner of the market and the southwest exit will take you to a bus stand.

Whoever loves to browse endlessly through small yet enticing shops, will find the Central Market (Phsar Thmei) in Phnom Penh an enchanting place. The name “Phsar Thmey” means “New Market” but in English, it is commonly called “Central Market”. This may cause some come confusion because Phnom Penh also has a “Phsar Kandal” close to Wat Unalaum and the Riverside. That name would translate in English to “Central Market”.

In 1975, Tuol Svay Prey High School was taken over by Pol Pot’s security force and turned into a prison known as Security Prison 21 (S-21). It soon became the largest such center of detention and torture in the country. Over 17,000 people held at S-21 were taken to the extermination camp at Choeung Ek to be executed; detainees who died during torture were buried in mass graves in the prison grounds. S-21 has been turned into theTuolSleng Museum, which serves as a testament to the crimes of the Khmer Rough. The museum’s entrance is on the western side of 113 St just north of 350 St, and it is open daily from 7 to 11.30 am and from 2 to 5.30 pm; entry fee is US$ 8 including Audio tour for explanation. Like the Nazis, the Khmer Rough was meticulous in keeping records of their barbarism. Each prisoner who passed through S.21 was photographed, sometimes before and after being tortured. The museum displays include room after room in which such photographs of men, women and children cover the walls from floor to ceiling; virtually all the people pictured were later killed.

You can tell in what year a picture was taken by the style of number board that appears on the prisoner’s chest. Several foreigners from Australia, France and the USA were held here before being murdered. Their documents are on display. As the Khmer ‘revolution’ reached ever-greater heights of insanity, it began devouring its own children. Generations of tortures and executioners and were in turn killed by those who took their places. During the first part of 1977, S-21 claimed an average of 100 victims a day. When the Vietnamese army liberated Phnom Penh in early 1979, they found only seven prisoners alive at S-21. Fourteen others had been tortured to death as Vietnamese forces were closing in on the city. Photographs of their decomposing corpses were found. Their graves are nearby in the courtyard.

Altogether, a visit to TuolSleng is a profoundly depressing experience. There is something about the sheer ordinariness of the place that make it even more horrific; the suburban setting, the plain school buildings, the grassy playing area where several children kick around a ball, ousted beds, instruments of torture and wall after wall of harrowing black-and-white portraits conjure up images of humanity at its worst. Tuol Sleng is not for the squeamish.

The Temple has a strong connection with establishment of the capital city Phnom Penh in native language means literally the hill of Ms.Penh. According to a legend, a woman name Penh found a lot of little statues of Buddha in the river, and established the first settlement. Wat Phnom temple was built on the nearby hill to celebrate the Buddha Statues found in the river. It is widely believed that the Wat Phnom Temple was built in 1317. It is the largest religious building in the capital city of Phnom Penh. A lot of other smaller chapels were built in the vicinity of the Wat Phnom during the last centuries.

This museum takes as its focus the social history of the city of Phnom Penh; this does include the relationship of the city with the rest of Cambodia. The museum is filled with diorama, which describe the history and major events of the city. There are also numerous artifacts: uniform of kings and soldiers, farm implements, paintings, photographs, political tracts and so

Nowadays, Wat Phnom is the foundation point for the city of Phnom Penh. This Wat is the major tourist destination in the city, and underneath this Wat is a surprisingly large and well-presented museum.